The spatioles: being in advance or late because of the declination.

The times of the water spatioles depend on the positions and declinations of the Moon, and of the Sun respectively.

This is the second of two related annexes,
possibly to be read in the top-down order:
spatioles - introduction;
water spatioles - leads, lags.

The graph of the spatioles at Venice. 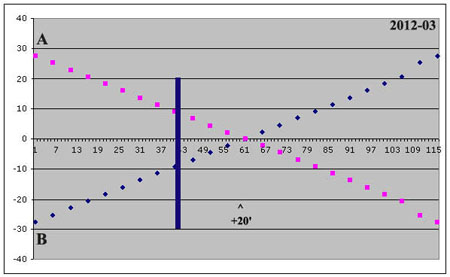 Above, I present the provisional graph (updated on March 2012), valid for the lagoon of Venice, of the advance and delay (in minutes), of the centres of the times of the spatioles, due to the declination of the respective generating mass (either Moon, or Sun).