2.3.1 The cumulative dissipative cycle in water.

Even the water would use the dissipative cumulative cycle to keep entropy low. This would be evidenced by more or less regular forms, called "water figures".

Discontinuity of action and heat exchanges.

Thanks to my research on seeds, I already know that the force d signs its action (1) in discontinuous episodes, for the simple reason that it acts only with the movement at critical angular velocity values of the molecules, object of observation, relative to other matter, (2) provided that there is also coherent thermal exchanges, consistent with the trend of the movement.

If I want to confirm my hypothesis, formulated during itinerary 2.2, that water also makes use of cumulative-dissipative processes, I must first detect any discontinuous effects that the movement of the Moon has on water, at critical angular rates, during patient observations.

In seeds, still with respect to the Earth, all the molecules are involved at the same time, during a critical angular velocity, valid for the fatty acids of the seeds, with respect to the Moon. For example, you can see it in sunflower seeds, when they change color and texture, in a very short time.

The effect of force d in liquid water is not easy to observe, because the molecules move with respect to the Moon at different angular velocities. It is to be expected that in water the “force d” is often active, but with few molecules per single event.

This fact makes such processes widespread, but hidden from the naked eye, for lack of contrast, save at particular times, better if observed in locations – real natural astronomical observatories – where the phenomenon of the “water figures” is amplified. 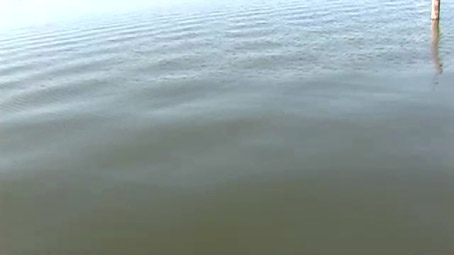 In water, discontinuous events can be observed only when there is a large number of molecules involved in cumulative-dissipative processes, at the same critical angular velocity, with respect to other matter, in this instance with regard to the Moon, in a very short span of time.

The more the conditions I will mention on the next page are realized, the more the discontinuous events I expect are concentrated around one of the critical angular velocities valid for water, the more will form what I call "water figures".

These “water figures” can take the form of protuberances, arranged in more or less ordered grids, interpreted by me as due to a decrease in water density (see page 2.3.5).

When cumulative dissipative processes are better coordinated, they can take the form of density waves (see page 2.3.6).

The latter should not be confused with ordinary waves, caused by the wind or the passage of a vessel. To date, compared to ordinary waves, seven characteristics have been identified in density waves. This places these waves in a separate category (see page 2.3.8).