On a quite surface of water, more or less regular shapes called “water figures” may get formed; they would be due to changes of water density. They would indicate how the tide is generated.

Results of the observations.

At particular times, on a quiet surface of water - either in a lagoon, or a lake, or a sea - one may see more or less regular forms, of varying sizes, caused neither by the wind, nor by a boat.

These forms, here called “water figures”, would be the result of a variation of water density, as the water molecular configurations would change. 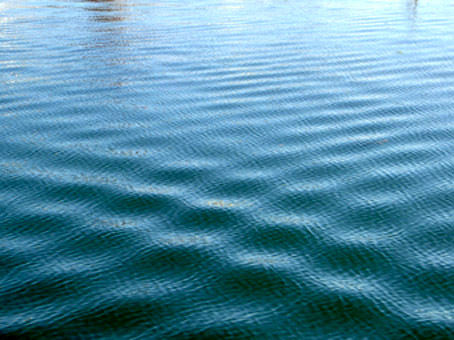 The water figures may take various ephemeral regular shapes (round, square, rectangular), most of the times over a grid. They may be of various sizes. Some may appear for a few seconds, others up to a few minutes.

Perception of the ordinary water figures.

Usually, the “water figures” do not catch our attention. Excepting the persons who already have had the chance to know of their existence, and got accustomed to them. This applies to the ordinary ones, easy to be perceived.

See the insert P - On the perception of the water figures.
See also page 2.2.7.

Examples of water figures presented with the aim to educate our minds to accept and perceive them.

At the beginning, the best way to exercise our minds to accept them, is to see them frequently, above all the ordinary ones, those which do not defy our common sense.

If they are shown by means of photos, videos, thus out of context, or on monitors while being recorded, thus with less information, our mind would be less reluctant to accept to see them.

In the annexes below, there are introductory examples for random exercises. The figures that a person finds it easy to decode, may be difficult for another one.