On seeds, in brief.
Respecting what is required by the cumulative dissipative cycle of the seeds, before sowing, germination power and harvests increase, as evidenced by experiments and consequences.

Managing the germination capacity of seeds, in order to increase yields.

On this page, I consider in brief the procedure that allows to increase the germinability of the seeds, and therefore to increase the harvests. This can be done by exploiting the phases of the cumulative-dissipative seminal cycle.

In nature, this cycle has the function of maintaining over time the germinative capacity of the seeds.

Thanks to the procedure recommended here, we can now adapt to what is required by this cycle, intervening in accordance with the cycle times, in the right ways, in order to significantly increase the germination of seeds, and crop yields.

The cycle that keeps the seeds germinable for a long time.

Seeds tend to lose germinability due to temperature, humidity and passage of time.

At present, it is believed that this happens gradually and inexorably.

It is precisely the alternation of loss and recovery of germination power, which keeps them germinable for a long time.

How the cycle is activated (in theory).

The cumulative-dissipative cycle is activated in the seeds by angular movement with respect to other matter, and by heat exchanges in coherence with the movement.

The seed is in a cumulative phase when its movement, with respect to other matter, is increasing, and when at the same time it can accumulate heat.

The seed is in the dissipative phase when its movement, with respect to other matter, is decreasing, and when at the same time it can dissipate heat.

How the cycle is activated (in practice).

Most of the time, the seeds are stationary relative to the ground, but moving relative to the Moon. In practice, it is precisely the angular movement of the seeds with respect to the Moon that activates the cumulative-dissipative cycle, and that keeps them germinable over time, if assisted by heat exchanges, in coherence with the two phases of the cycle.

The cumulative-dissipative cycle in seeds.

angular velocity of the Moon around the Earth
cumulative-dissipative cycle

The angular velocity, given as hourly average, of the delay recovering of the Moon, on its revolution around the Earth, defined in 86400 deltins, and performed during one sidereal month. 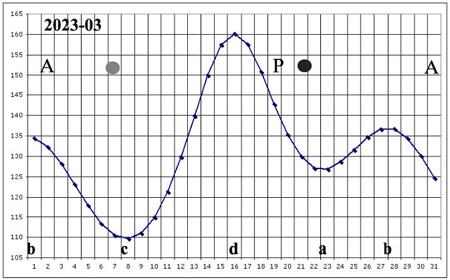 calendar of the cycle ||| legend

However, the cumulative-dissipative processes take place only at critical values of angular velocity with respect to other matter, therefore only during short episodes of interaction.

This fact was immediately evident, since experiment A, where a single sunflower seed is put in motion with respect to the surrounding matter, at random angular velocities. The results can be the most varied. They depend on the angular velocity at which the seed are moved. The seeds may either undergo no variation, or change color and tenderness to various degrees, or even transform into oil leaving a remnant of mucilage.

Another fact that attests that such processes happen during brief episodes of interaction is the different efficiency of the cycle, over the course of 18.6 years, depending on how much the Moon declination with regard to the equator varies. The greater the excursion of this declination, the greater the variation of the angular velocity, the shorter the episodes of interaction, during which the cumulative-dissipative processes may take place, the lower the agricultural production, all other conditions being equal.

Another consequence we can see with the results of the experiment E, when seeds are sown a day or a few hours before the start of a dissipative phase, when the angular velocity variation of the seed relative to the Moon is reduced, and the interaction episodes, where processes can take place, are of relatively long duration. This is how you get the most crops.

Here the results are obtained from 5+5 seeds at two different temperatures during the cumulative phase before sowing, in a year of lean times (2005). Those kept at higher temperatures gave the best results. See details on page 1.1.2.

From 9+9 seeds kept at two different temperatures during the cumulative phase before sowing, in a year of abundance (2015). Those kept at higher temperatures gave the best results. See details on page 1.1.3.

Different probabilities in the two phases.

So, the cumulative phase turns out to be functional to the dissipative one. Within certain limits, paradoxically, cumulative processes give opportunities to create more order, and to diminish entropy.

What has been said so far allowed me to devise a procedure to increase the germinative capacity of the seeds, and consequently the harvests, in the order of 30-50 per cent, ceteris paribus.

Procedure: before sowing, in the cumulative phase (b-c; d-a) the seeds should be kept at moderate temperature (not low), while they should be sown in the dissipative phase (a-b; c-d).

As a matter of fact, the best results are obtained when the seeding takes place just before the beginning of the dissipative phase.

The sowing procedure - where the way in which germinability varies is taken into account - does not present major problems of being accepted and applied by pioneering farmers. Better if the cultivation is in greenhouse, where the programming of the sowing is facilitated.