The year 2005 was a year of lean times, that is, a year in which the cycle's efficiency in question is reduced, as we will see on page 6.

During the cumulative phase of the cycle before sowing, the seeds were kept at a temperature of 15 ° C. Even those who gave the cobs on the right in the photo, except for 24 hours, during which they were subjected to a constant temperature of 35 °C [95 °F] (the same effect would be obtained by keeping them at 20 °C for a few days).

All the seeds were sown the day before the start of the next dissipative phase.

The five seeds that gave rise to the left panicles were also favored, in the sense that they too were sown in the best moment of the cycle, which is just before the beginning of a dissipative phase. This is because at the beginning of the dissipative phase, the variation in angular velocity is reduced, the episodes of interaction, during which the processes can take place, have a longer duration.

The two series of corn ears sown on contiguous short rows, on April 7th, 2005, the day preceding the onset of a dissipative period, a-b. 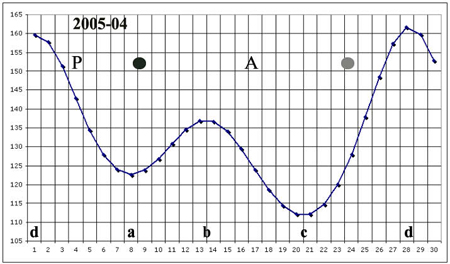