The Harvest result in a high efficiency year.

The two sets of corn cobs were obtained from the same number of seeds (nine per set), all of the same quality, taken from the same package.

The two series of corn cobs were sown on two adjacent short rows, on the morning of April 29, 2015, a few hours before the start of a dissipative phase c-d. 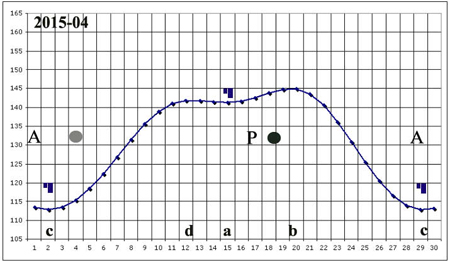 All the seeds were sown on two short and contiguous rows.

Also in this case, the two groups of seeds were favored in equal measure, relative to the cycle times.

Sown just before the start of a dissipative phase.

Both series of seeds had the advantage of being sown just before the beginning of the dissipative phase. They were thus able to benefit from a very low variation of the critical values of angular velocity, usual at the beginning of a period, and, at the same time, from the drop in temperature; all variables in favor of a good start of the germination processes.

For both series, the necessary water was supplied to the plants, for the entire period of growth.

In case of drought.

In case of drought, the difference of the results, between the two series, would have been accentuated (as suggested by the mini impromptu test in times of complete drought; it will be presented on page 1.2.6, as example 5: complete drought).

Ambient temperatures: minimum, medium and maximum, of the ten days of the cumulative period: 20 to 29 April 2015. 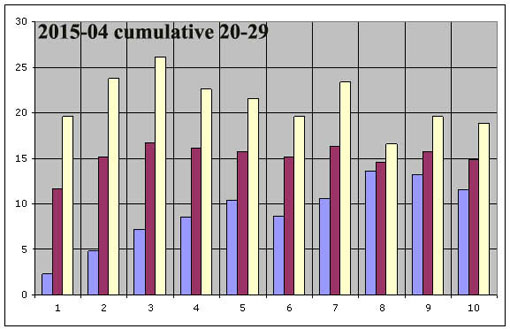