Experiment C allows us to see when the dissipative phase begins, in the cumulative-dissipative cycle.

Among the results of experiment A, there was that sunflower seeds, in motion relative to the surrounding matter, need to dissipate heat to become tender.

The three observations, presented on page 1.2.2, on seeds stationary relative to the surrounding matter, but moving relative to the Moon, have already given me some answers in this regard.

The significant events in the three observations take place when the seeds decrease their angular velocity relative to the Moon.

The contribution of experiment C.

The experiment C made me understand that the useful dissipation takes place during the periods a-b and c-d of the graphs indicating the angulr velocity of the Moon around the Earth, and therefore when between seed and other matter there is a decrease in angular velocity. Thus confirming what was seen during the three observations already mentioned.

Experiment C, performed on flax seeds, gave me confirmation: dissipation, when possible, occurs while the seeds, still relative to the Earth, decrease their motion relative to the Moon.

I took into account a known fact: that the deterioration in the germination capacity of the seed is due to temperature, humidity and the passage of time. This worsening is due to the decrease in the percentage of orderly fatty acids.

I hypothesized that the seed, next to a dissipative phase, could also have a cumulative phase.

This cycle, again as hypothesis, could have the function of maintaining over time the germinative capacity of the seed.

All hypotheses will be confirmed in the subsequent experiment E.

Seeds have different thresholds of germination.

I also took into account the fact that for each kind of seed, there is a quantity of orderly fatty acids below which they cannot germinate.

Some seeds show the ability to germinate all the time, with no problem; e.g. wheat; most of the times, in them, there would be enough orderly fatty acids left over to germinate.

On the contrary, other seeds - e.g. flax seeds - once properly conditionned and kept still relative to the surrounding matter, are able to germinate only during what I call the dissipative phase of a cycle, and during a few days after its termination.

So, flax seeds were chosen for an experiment, called experiment C, to determine at which point of a supposed cycle, flax seeds become viable again, able to germinate.

In flax seeds, the germination threshold - the quantity of orderly fatty acids under which they cannot germinate - is high. So they go under it easily during what I called “hard seed phase” (later called cumulative phase), during which they, at given condition, suspend their ability to germinate, put themselves on hold, until the beginning of the dissipative phase.

This peculiarity of the flax seeds made it possible - thanks to an experiment, here called experiment C - to understand the periods in which the capacity to germinate decreases, and the periods during which it recovers. 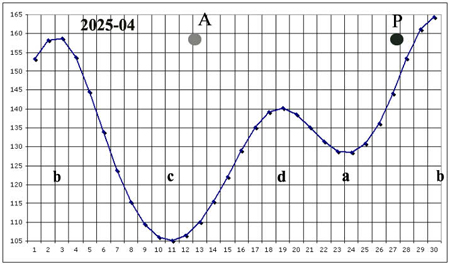 An instance of the seed viability cycle. This applies to the seeds still relative to the surrounding matter.

During the last days of the periods b-c and d-a.

In the case of flax seeds, and of other seeds featuring high germination threshold, under which they cannot germinate, above all when the temperature is high, the following applies.

In order to check these assertions, one has to proceed to one series of germination tests, using flax seeds, during a hard seed phase, either b-c, or d-a, at least 7 days long (here period b-c). Starting one test of germination for each of the last five days that precede either a “point a”, or a “point c” (in this case: point c). 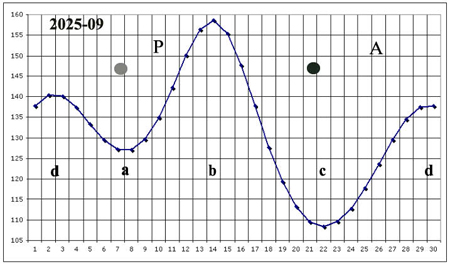 First of all: the seeds used for the test must be conditionned at temperature between 20 and 30 °C for some days at the beginning of the chosen non-dissipative period.

By doing this, most of the orderly fatty acids will degrade to normal fatty acids. In other words the degree of their configuration uniformity will decrease. So that there is not enough orderly fatty acids left, to assure the necessary fluidity, without which the seeds cannot start the germination process.

Moreover the seeds are to be kept still relative to the surrounding matter all along the hard seed period chosen for the test (either b-c, or d-a).

Abiding by this procedure, all the seeds of the last three or four days do not begin their germination, but keep waiting until the onset of the next dissipative period (a-b; c-d). All the seeds of the series of tests, which had been moistened on different days, will start the germination at the same time.

As for the few seeds which have started the germination process earlier, it is possible that either a sufficient quantity of orderly fatty acids was left over, or that the second condition was not complied with.