The seed uses the cumulative-dissipative cycle to recover the ability to germinate.

The contribution of the experiment E.

Experiment E confirmed to me what emerged during experiment C, that the seed, in order to gain degree of germinability, needs to dissipate heat when it is decreasing its angular motion, with regard to other matter.

The experiment E confirmed my hypothesis that before the phase in which the seeds dissipate heat, there must be also a phase during which they accumulate it. But that's not all.

Moreover, experiment E made me realize that what determines the degree of recovery and increase in the germination capacity of seeds is the degree of temperature, at which they are kept when their angular velocity relative with other matter is increasing (for seeds stationary on the soil, periods b-c; d-a of the calendar).

It is enough to increase the temperature (well below the limits that they can endure) during this phase, called cumulative phase, before sowing, to increase yields. 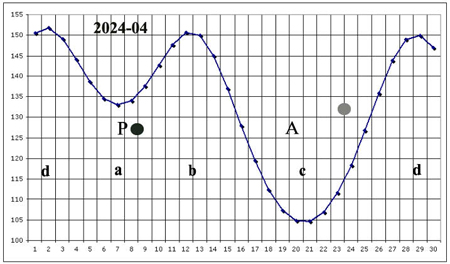 So, thanks to experiment E, I discovered the importance of the cumulative phase, when the seed at the same time absorbs heat and its angular velocity relative to other matter increases.

To be precise, experiment E made me understand or confirm:

(1) that if the movement of the seed is not in agreement with the heat exchanges, the cycle is not operational, which means:

(1a) the seed is in the cumulative phase when it is increasing its angular motion relative to other matter and at the same time heat exchanges go towards the seed;

(1b) the seed is in the dissipative phase when the angular motion decreases relative to other matter and contextual heat exchanges are towards the outside (it is dissipated);

(2) that the cumulative phase precedes the dissipative phase; which means:

(2a) that the efficiency of the cycle to keep the seed viable over time usually depends on the temperature at which it is kept during the cumulative phase that precedes sowing (naturally within the limits that the seed can withstand);

(2b) that during the dissipative phase, the seed operates as a consequence of what happened in the cumulative phase, except in cases where the conditions do not allow adequate dissipation.

Procedure of the experiment E.